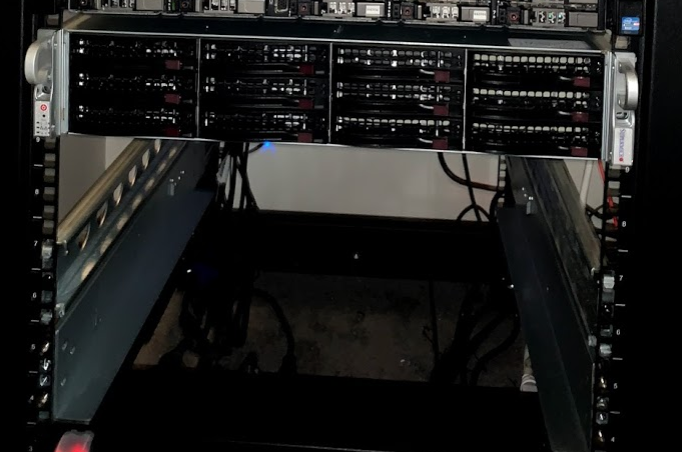 So after a number of years labbing, I decided it’s time to graduate to a rack. This is my series of posts documenting the migration.

I deal with a lot of storage in my lab, and a huge focus has always been keeping the lab as quiet as possible. This meant I deployed everything in tower cases.

This was a good day after a cleanup:

And this was the results of that cleanup:

So maybe it’s just me growing older (and my hearing going a little), and having a desire for a bit more organization, but recently I decided to bite the bullet and get a rack, the Startech 25U adjustable rack to be exact.

The first server to be migrated was a trusty old D-1518 fileserver in a U-NAS case.

I will say, that U-NAS case is pretty nice. It’s all rubberized and has a nice premium feel to it. The inside of the case is pretty tight, and I threw the fan block from the original SYS-E300-8D case to keep the CPU and HBA nice and cool:

The new home for this server was a Supermicro CSE-826 case.

The first hurdle presented itself shortly after pulling the HBA. The 2U case only takes half-height PCIe cards, and my bracket was full-height:

Fortunately, by some miracle, I managed to track down the shorter bracket in a box somewhere:

The U-NAS looks a little sad when empty:

No build of mine EVER goes off without a hitch. It’s the curse of being a Murphy.

Some of them, I can plan for:

Some of them though, I did not plan for. Like the Flex-ATX motherboard being way too short for this case. That mean the 24 pin power and fan cables were all too short:

I actually had a 24 pin atx extender on hand from another project, but I had to wait for a few days for some four pin fan extensions to arrive:

The final issue I had was that the powered riser took a molex connector, and based on where I had to place the SAS expander, there was no way in hell that a molex connector would reach. So I had to order a molex extension cable as well.

Once all the extra cables arrived, the server finally went together smoothly:

Notice the rockstar placement of the SAS expander.

The final piece of the puzzle was that no matter what I did, the CPU ran VERY hot. So I used the old trick of placing a fan on top of the heatsink (picture was from when I did it prior).

Finally all racked up:

Overall, I’m pretty satisfied. It’s a little loud, but not terribly. And this is a server that’s not powered on full-time.