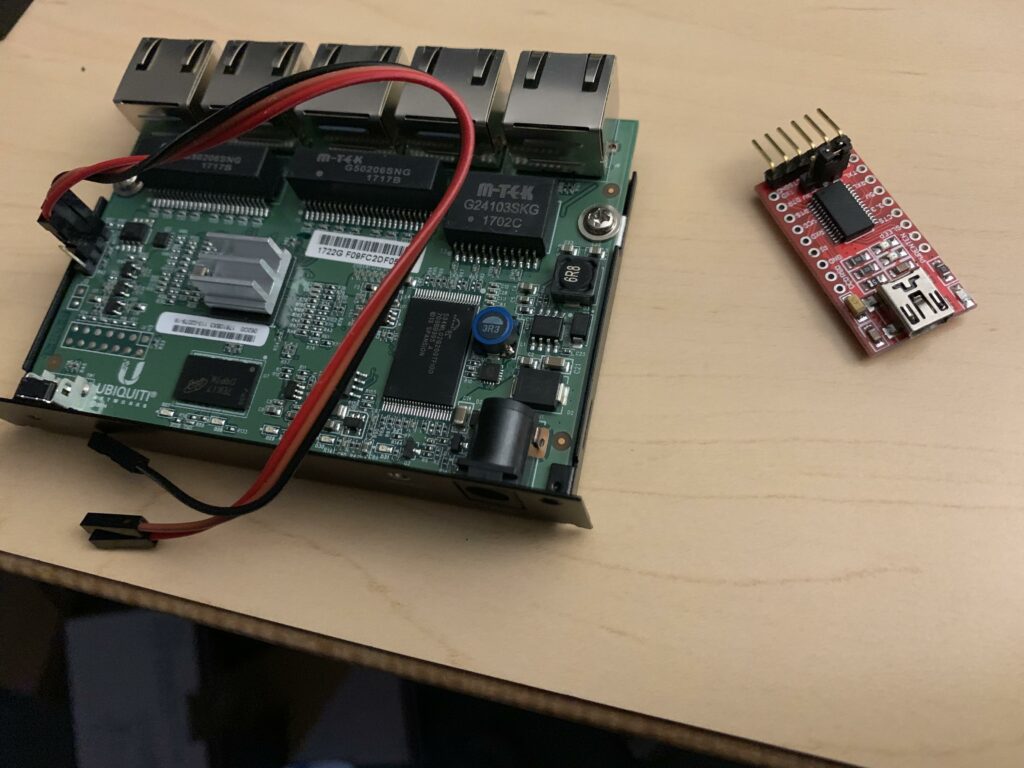 Although I’m not a huge fan of Ubiquiti stuff, some of the EdgeRouters hold a special place in my heart.

The CLI isn’t terrible, mostly like the VyOS CLI that I love, and for a very minimal price, you get a tiny PoE powered device that can handle almost 1Gbps routing. Not to mention now these things can run WireGuard, which is a huge bonus.

A huge downside for me is that the ERX doesn’t ship with an external serial port. Especially in my complex network, it can be a huge pain to get a device on a specific preconfigured subnet for initial configuration. Not to mention that if I happened to misconfigure something, I end up losing access and need to factory reset the device.

Fortunately, the ERX does ship with exposed UART TTL pins, so adding a serial port should be a simple task.

The only part I needed was a USB to TTL adaptor, often used for Arduinos. Apparently this one has a fake FT232 chipset in it, so it can be troublesome to use in Windows. Fortunately all I use are Macs and Linux desktops, so that wasn’t an issue.

I had some leftover jumper cables from some Raspberry Pi machinations. Thankfully, Amazon shipped it overnight.

This was never going to be a pretty build, and I needed to figure out a spot on the case where the USB->TTL adapter could fit, but not block the case from closing.

So enter the electrical tape:

And a nice hole from a power drill:

Slightly less nice after opening it up a bit to fit the USB connection:

Making it ugly and permanent with some hot glue:

Before sealing up the, I decided to actually test it out. It took me far too long to figure out that the ERX used a non-standard serial speed of 57600.

After that, I was off to the races:

And when it’s all closed up, it doesn’t even look horrible!

10 gigabit inter-VLAN with a Mikrotik RB4011