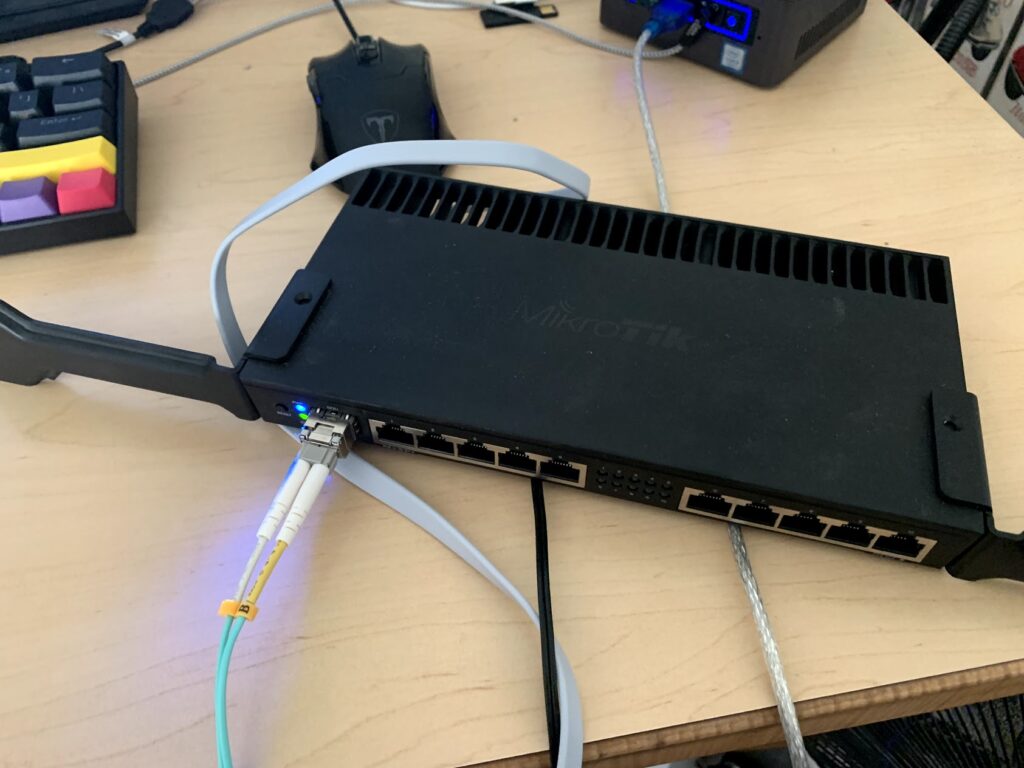 Something I see pop up fairly regularly on a few of the forums, Discords, and subreddits that I hang out on is that the RB4011 is not capable of 10 gigabit routing

I’d be lying if I said that this xkcd wasn’t me sometimes:

Of course, whenever this pops up I’m not in a position to demonstrate the proof. It definitely can go almost full 10Gb.

But you say, it’s only got a single SFP+ port!

That’s what full-duplex is for!

I’ve got a number of these devices and have tested them extensively. The RB4011 is definitely capable of 10 gigabit routing, in a router-on-a-stick fashion.

As this is something that comes up almost weekly, I have decided it’s time to officially document an RB4011 going almost full 10 gigabit.

For this setup, I reset the config on a RB4011 to empty, spun up a simple Debian VM, and connected an existing host and the VM through the RB4011.

As you can see, the hacky result on my desktop:

This config is about as simple as it gets. Two VLANs on the sfp-sfpplus1 interface, and IP addresses on the respective interfaces.

VLAN2222 is a new VLAN I spun up for this test, and VLAN22 is an existing VLAN on my network, where a host is running iperf3 -s

The Debian VM is also very straightforward. ESXi, with a few vCPUs (sometimes at higher iperf3 tests, the CPU can get tapped out), and network connected to VLAN2222

A static IP and default route, and we are ready to roll:

The results sort of speak for themselves. With an iperf3 to a host on VLAN22 (two streams), we have no issues going 10Gb:

With a single stream, it fairs moderately worse:

Note that is on a basic 1500 MTU network, so I did not set jumbo frames.

And what’s the CPU doing during this?

While I’m not going to do it here, I have done testing in the past with IPv6 and firewalling:

Battle of the Virtual Routers