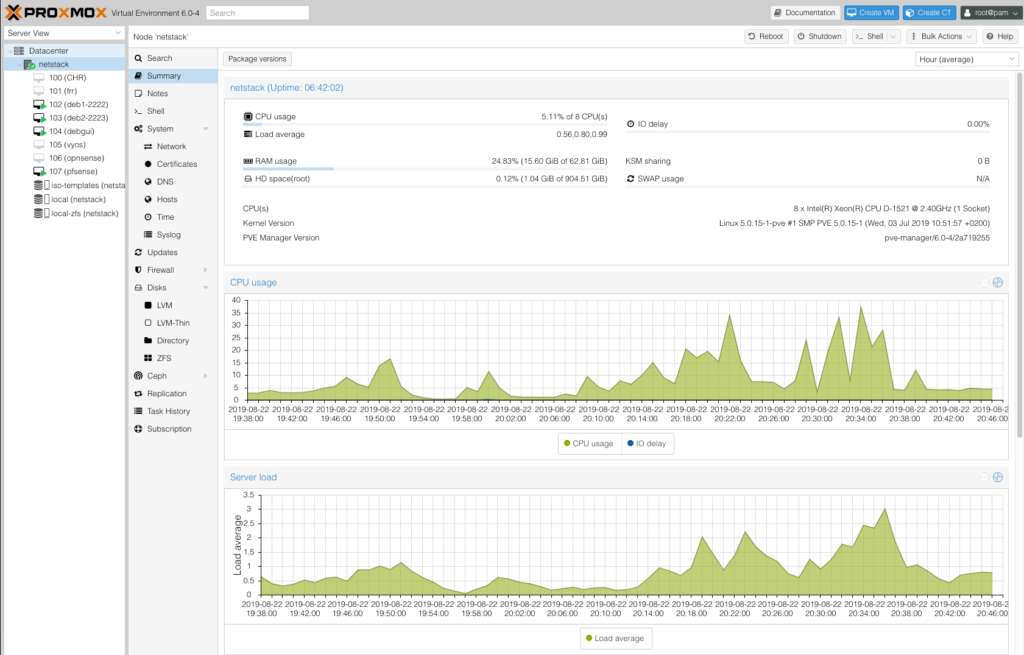 This is going to be a bit of a long post, so I’ll be brief in the intro.

Over the last few years, I’ve become enamored with routing.  As part of that, I’ve spent a lot of time exploring the various virtual routing platforms, trying to eek out the best performance possible.  So I decided to put them all head-to-head in a virtual setting and see how they fare.

For the purpose of testing and to make all things equal, pfSense and OPNSense will be running with NAT disabled and pfctl -d, to remove the potential slow-downs from packet inspection.  The CHR, Debian, VyOS installs won’t have firewalls running.

If you are just interested in the final results, they are HERE.  Or maybe you’d like the results when I ran the test on ESXi HERE.

They say a picture tells a thousand words, so I think a simple network diagram should illustrate the setup:

I’ll be replacing the firewall image in this picture with the various victims.

I’ve got a LOT of routing going on in my network.  At last count, I think I have at least 8 hops from one end of my network to the other, so OSPF simplifies adding new subnets behind various routers.  In most cases, I don’t even bother to add default routes to new hosts as OSPF floods the default route from my edge device.

For these tests, I wanted to use KVM.  The network stack on ESXi has been driving me crazy lately, so I was hoping KVM would give me some decent results.  Proxmox makes this pretty trivial, so that’s what I set up.

This is a more-than-capable machine for these tests, though I will say I’ve gotten better results on my Broadwell E5.

The networking config on the host is pretty simple. To further isolate things, I have two different ports running as Trunks.  Proxmox networking goes over one, and the networking for this test lab goes out of the other.

I did try using OVS, just to see if the results were any different, but they weren’t.  So on Proxmox, the network config is pretty simple:

All  VMs are connected to vmbr1.

The VMs should be fairly equal.  CPU-wise, I’ve gone with 2c2t.  RAM is 2GB, which is overkill for basically any of these

The first batch of routers are all based on Linux.  The VyOS version I used (1.2.2), is based on Debian Jessie with a modern 4.19 kernel and runs FRR.  The CHR is based on an ancient 3.x Linux kernel.  The plain Linux install will be the latest Debian Buster, with the repo version of FRR, 6.0.1.

The config is painfully simple.  Three interfaces, WAN/LAN/LAN2, OSPF, DHCP on the LAN interfaces (for ease of use) and enabling SSH.

As initially mentioned, there’s been no firewall configured here.  I’m only interested in pure routing performance.

VyOS generally boots pretty quickly, at least with a simple config.  37 seconds from starting the VM to routing packets.  That’s also with the bootloader timeout.

I would be lying if I said I wasn’t at least a little bit disappointed with those results.  Especially since the direct VM->VM on the same layer2 test shows quite a bit more performance:

I guess it’s just the hardware.

I have a few VyOS VMs on ESXi as my main intervlan routing devices on bigger hardware, and those are capable of 15-30Gbps routing between VMs on the same host depending on how busy the host is.

I have gigabit Internet, so I wanted to make sure results are at least close to what I would get natively.

Given that this lab is behind a few routers, and my network is fairly busy at any point in time, these results are close enough to gigabit to count.

I was curious what kind of CPU usage there would be under max routing load.  Obviously adding a firewall would add to this a bit:

The was just a plain Debian Buster install with FRR installed.  Honestly, most of the results are throwaway, since they are largely identical to VyOS.

There isn’t much in the way of special config here.  Enabling net.ipv4.ip_forward = 1 in /etc/sysctl.conf is a must.

This is the one metric that isn’t throwaway compared to VyOS.  19 seconds from power-on to routing is FAST, and that’s with 5 seconds of grub time.  This means if you are interested in super fast boot times, it’s probably worth your time learning how to set up a router/firewall on unadulterated Linux.

As hinted at, the results are very similar to the VyOS results.  Not surprising considering same kernel versions, both are FRR, etc.

With these speedtest results, I must have found a rare moment when the rest of my network was mostly idle:

All in all, the differences between FRR and VyOS were pretty minimal.  Despite the longer boot times, I would probably just  use VyOS, for the CLI and ease of configuration.

I’m a heavy Mikrotik user otherwise (multiple RB4011s, CRS317, 326, hex, haps, etc), and CHRs are something I feel like should really perform well.

This is where things started to get a bit funky.  I’ll be honest here, the CHR results were the ones I was most interested in.  I have NEVER been able to get decent routing results out of a CHR, I was hoping the proverbial “blank slate” would allow me to get the real picture.

The VM was a freshly installed (via systemrescuecd), 6.45.3 CHR, unlocked with a purchased unlimited license.

The config here was painfully simple again.  A few interfaces and DHCP servers.

Frankly, the boot time was really about the only decent thing about my CHR tests.  12 seconds, which is in-line with the other Linux results, there’s just no 5 second timeout in grub to contend with here.

These results really made me question my testing methodology.  Abysmal is about all I can say about it:

I really spent a lot of time fighting these results.  They felt way off.  Some of the troubleshooting:

In the end, I couldn’t do anything to really change the results.  They held pretty steady at 3Gbps.

As mentioned above, probably a throwaway test.  I just happened to run this test when my network was a little bit busier.

Interestingly enough, the CPU usage on the CHR is quite a bit higher, despite also Linux.  I’m guessing this is attributed to the fact that quite a few networking enhancements and optimizations have occurred in later Linux kernel versions + FRR.

I was REALLY disappointed with the Mikrotik results here.  I know RouterOS is more than capable of going faster than those speeds, but I’m not sure what kind of tweaking it takes to get it.  Maybe you need lots of sources and destinations.

I know my RB4011 can do almost full 10Gb (unless you are on IPv6 grumble grumble), CCRs can do way more, so I don’t know why this thing is so slow.  And it’s been like that every time I’ve tested it, whether on KVM or ESXi.

It definitely wouldn’t be a complete test without also testing two popular players in the FreeBSD world.  OPNSense and pfSense.

For these tests, a number of important configuration options were applied:

I’ll be honest.  I think these *Sense platforms aren’t really great routers.  Can they route intervlan?  Sure, but even with FRR somewhat native now, it’s just a pain and very clunky.

With pfSense, I never actually did get FRR running.  It starts, but it just doesn’t do anything.  Not to mention the GUI for it absolutely sucks and is just a confusing mess.  It doesn’t actually impact these tests, but I annoyingly had to create some static routes on my other routers to get everything working.

Not fast, 37 seconds with a few seconds at the bootloader. I’m also positive I’ve seen this take considerably longer when it’s not a basic config.

Again these results made me question my testing methodogy a bit:

It’s worth noting that I’ve personally seen about 6Gbps on decent hardware, with pf enabled, so I know some of this is due to to the hardware.  But I also did try some troubleshooting:

Nothing really made too much of a difference.

Welcome back to the land of probably-not-very-useful-benchmarks.  As before, this easily represents gigabit; my network was just busy.

These CPU results are more within line of the CHR results above.  Meaning resource-wise, pfSense takes a bit more to route at high-ish (crappy) speeds.

For the most part, OPNSense and pfSense performed mostly identically, to the point where it’s almost not worth the posting the results.  But I will.

I will point out that I was able to get FRR going in about 20 seconds on OPNSense.  Whereas on pfSense after hacking around with it for 20 minutes I still couldn’t get it running.

I’ll also say that I like some things about the OPNSense UI and absolutely hate others.  There are definitely some things buried in weird and unintuitive places.

At 34 seconds with 2 seconds of bootloader, this is a few seconds quicker than pfSense.

Within the same range as pfSense, similarly disappointing:

As with pfSense, the CPU definitely spikes and stays a bit higher during heavy routing.

After all these tests, it appears I’ll probably be sticking to VyOS or Debian for my routing needs.  Mostly just for pure routing tasks, which is a lot of what I end up labbing up,  Linux seems to do it a bit better.

As mentioned, I’ve seen pfSense run up to 6-7Gbps.  So the slow speeds on pfSense and OPNSense here are almost certainly due to the host.  Along the same line, my VyOS routers that run on my E5-2540v4 can route at 30Gbps or faster, so the 12Gbps observed here is slow.

As far as the CHR is concerned, I’m not sure.  I’ve done extensive testing with them, and even with the unlimited license, I’ve never see very good performance out of them, at least not without 100 hosts behind them.

So before I close this up, I decided to spin up one more set of tests on ESXi.  The painfully low pfSense and CHR numbers made me really believe that there was an incompatibility somewhere.  Maybe  CHR and pfSense just really don’t like the virtio drivers.

I also only tested VyOS, CHR, and pfSense, since the Debian and OPNSense numbers were largely duplicative.

As far as boot times are concerned, the shorter times are caused by being on faster storage, though I don’t know why the CHR decided to be an outlier.

For VyOS, the slightly increased number tracks with my expectations due to CPU and memory bandwidth.  My ESXi server is an E5-2640v4, which runs circles around a D-1521.

For the CHR and pfSense, I wouldn’t expect the numbers to be over double just due to the platform change, so I have to believe it’s mostly due to some driver situation.

A New Switch for a New Day

10 gigabit inter-VLAN with a Mikrotik RB4011