Skip to content
Posted inRetrolab
Posted by By Kroy January 14, 2021 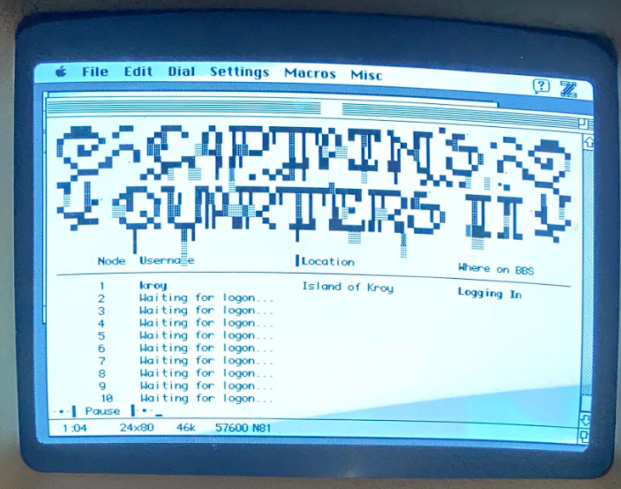 There’s a simple reality that most people in 2021 probably don’t even have a concept of what a BBS (bulletin board system) is, but with my recent retro-lab musings, I discovered that BBSes are alive and well.

A huge and defining part of my youth was trolling all the BBSes I could find. At the time, there was no Internet, so BBSing was my window to the world. It was basically the only place to find all the new shareware, images, door games, and more. And later on, it even become possible to exchange messages with BBSes around the world through the use of FidoNet.

In any case, there was nothing more exciting than checking into your favorite BBS and playing a bit of TradeWars, or spotting the newest Commander Keen (4 to be specific), and waiting ALLLLL night for it to download. Of course it was ONLY 600KB, but that took upwards of 6 hours to download.

Although I was casually aware that BBSes still existed via telnet, a recent post on Reddit’s r/VintageApple subreddit really caught my eye.

It didn’t take much work to get my PowerMac 7200/75 connected via telnet to the Captain’s Quarters II, and I was immediately hooked!

Of course, that was only the beginning…

But this wasn’t enough. In my original BBS days, i was using either some sort of all-in-one Monochrome Macintosh, or BananaCOM on MS-DOS something on an 8088 Acer, both with some 1200/14.4k/38.4k modems.

As I’ve mentioned in the past, when I do something, I do it up big. So I immediately knew I needed to get my Mac SE connecting to this BBS!

My first attempt was hooking together the Mac SE and PowerMac 7200 via a serial cable, and sharing the PowerMac’s Internet connection with IPNetRouter.

Unfortunately, I was never able to get this working, though I did finally get an AppleTalk share set up between the two hosts.

I was starting to get a little disappointed, until I decided to get a “real” modem.

Of course, anybody that follows tech knows that modems have been entirely obsolete for a very long time. Even though I do have some old Mac modems somewhere, the simple fact is I don’t even have a phone line to plug them into, let alone a number to dial that would be valid in 2021.

That’s about when I discovered the WiModem232.

To make a long story short, it’s a device that connects via WiFi and acts like an actual Hayes compatible modem. Of course, you don’t dial phone numbers, but in my case, telnet addresses.

I was smart, or so I thought, and ordered up a couple of cables. One for my Mac Fleet, and one for my 486 running DOS.

It arrived quickly and did exactly what it promised to do.

Unfortunately, the Mac cable took a few extra days to arrive, so I was forced to “slum” it on my 486 and Bananacom. And Captain’s Quarters II looks and runs great there too:

A few days later when the Mac cable arrived, I realized the horrible mistake I had made.

The mistake, of course, was that the cable I ordered was for hooking up an ImageWriter printer, and not a modem. But amazingly, in the never ending treat-bag of old Mac “stuffs”, I discovered I had a DIN8->DB25 cable for hooking up a modem.

It didn’t take long to hook it up, but unfortunately things were… not well.

Fortunately, that was just due to the ANSI colors, which I was able to turn off with a simple checkbox in ZTerm

And everything looks great:

And in attempting to download an old game, the memories of the dreaded “CRC Error” came flooding back to me:

That’s what ZModem is for.

What I discovered is that this old Mac isn’t particularly stable over the serial port going past 19,200. Knocking down the baud rate made it download just fine (and slowly):

Of course, what’s the point here?

I can access Captain’s Quarters II and other BBSes just fine over telnet from my laptop or workstation. And since I have a Floppy EMU, there’s obviously better ways to transfer files to the Mac SE.

For me, it’s the nostalgia. Doing the things I used to do, on the hardware (or similarly enough) to the hardware I used to do it on. I love this hardware and rediscovering BBSes has opened up a whole new world to me.