Skip to content
Posted innucnucnuc
Posted by By Kroy March 30, 2017 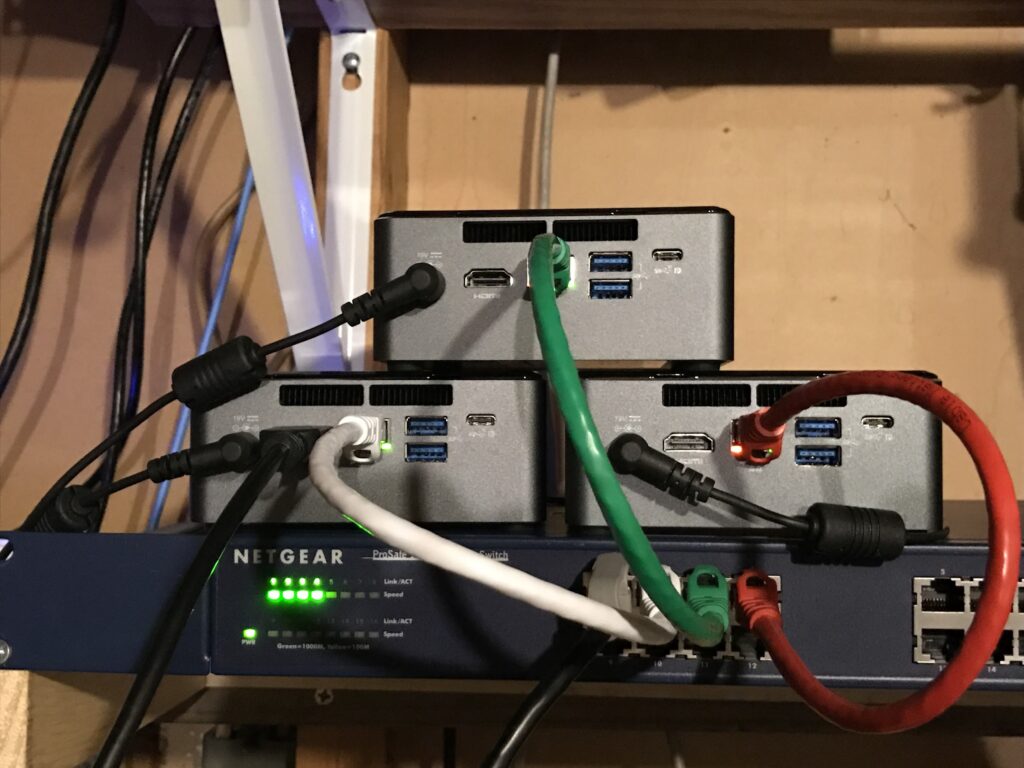 In the next year, I will be forced to replace about $200,000 of aging hardware due to end-of-life. I am not excited about this prospect.

My mission in this is to replace all my aging production hardware as cheaply, but efficiently as possible. This encompasses a few Nimble SANs and a stack of Dell servers, as well as a soon-to-be forced upgrade to VMWare Enterprise Plus/Plus license. That last fact has soured me a bit on VMWare.

To that end, I decided it was best to research potential alternatives to the traditional “heavy” virtualization stack. While our Nimbles offer the speed and IOPs we need, the price tag on them is extremely hefty.

In 2017, technologies such as hyper-convergence have moved beyond buzzwords and into a realm of being accessible by the masses (okay, so it’s been available before, but this is the first I’ve looked into it).

While my homelab is extremely capable and in most cases overkill, the idea of having physical hardware as a testbed was attractive to me. A key goal was to have a reasonable facsimile for the real thing.

With that decided, I placed an order for 3 NUCs, some RAM, and an array of drives for them.

(three NUCs, I like the Stooges, the NucNucNuc is born. Get it?)

A few days later, they arrived.

I’ve seen a few small PCs in my days, but the size of these NUCs are shocking. They are TINY!

The Bill of Materials:

I figured for a testing platform, the heavier i5 or i7 CPUs were probably not needed, especially for the price.

As I mentioned above, it’s a bit crazy how small these things are. This fact was highlighted as I installed the drives and the RAM. The entire NUC’s footprint is only slightly larger than the 2.5″ laptop hard drive being installed.

Somehow, on two out of the three NUCs I stripped out the M2 SATA screw. Those things were on there TIGHT and no matter which screwdriver I used, it stripped it. I had to use a pair of pliers to remove them.

Fortunately, the NUCs shipped with with an extra screw, so I replaced the stripped screws with fresh ones (and made sure not to tighten them so much!)

The day that my NUCs arrived, I had met with the Nutanix reps over a lunch. It was a lunch meeting I had on the schedule for a few weeks, without any real idea what Nutanix was about.

Imagine my surprise when I found out that hyper-convergence was their “thing” and they liked to run small test clusters on NUCs.

The guys tossed me a download code over email and I almost tripped myself trying to get home to set up everything. I cabled them up into an old Netgear switch. The Netgear hooked into a tagged port on one of my managed switches and I set up a new subnet and VLAN for the test network.

Years of experience in building servers, installing and reinstalling operating systems taught me one simple lesson:

I was going to be installing and reinstalling multiple OSs on these NUCs, and I didn’t want to mess with changing IPs or constantly having to retype the same numbers.

I’m not saying DHCP statically assigned IPs are always the greatest thing (as I locked myself out of my NAS once), but for these things, they were going to save me a ton of time.

So into the DHCP Static address pool the MAC addresses of these NUCs went:

If you know me at all then you know that the phrases “Murphy’s Law” and “The best laid plans of mice and men” are two simple phrases that seem to govern my existence.

Okay, so maybe I didn’t PLAN on installing Nutanix on these when I ordered them, but it sure sounded like a great idea once I heard about it.

Nutanix won’t install with less than 4 cores. Of course the members of the NucNucNuc each have 2 cores. This is a surprisingly easy problem to fix, and after a few minutes of Googling, I got past it.

The second problem was the network drivers. While the NUCs contain NICs – say that 5 times fast – that are a variation of the popular E1000 series of NICs that work almost everywhere, the driver for them on the current version of Nutanix doesn’t work. I spent a few hours trying to cross compile something that would work and ultimately failed.

So for now, I had to give up on Nutanix for my NucNucNuc.

Once I dug into Nutanix a bit, I realized that this setup (distributed storage and compute) was potentially the direction to head. Having to refresh large storage nodes every handful of years just isn’t sustainable in the long run for a small company. Not to mention it would be nice to add more storage just by adding more drives or servers instead of whole new SANs.

The next thing I realized was that if I was serious about playing with various storage technologies, I was probably going to need secondary NICs for these servers. So I ordered up a bunch of Plugable USB-C to Gigabit NICs and hooked up the managed switch I had from attending a webinar.

I also took the opportunity to put the “dumb” Netgear switch where it belongs, as a shelf

Whiteboxing a 1U – completing the rage

Completed the Xeon D Lab with a Router