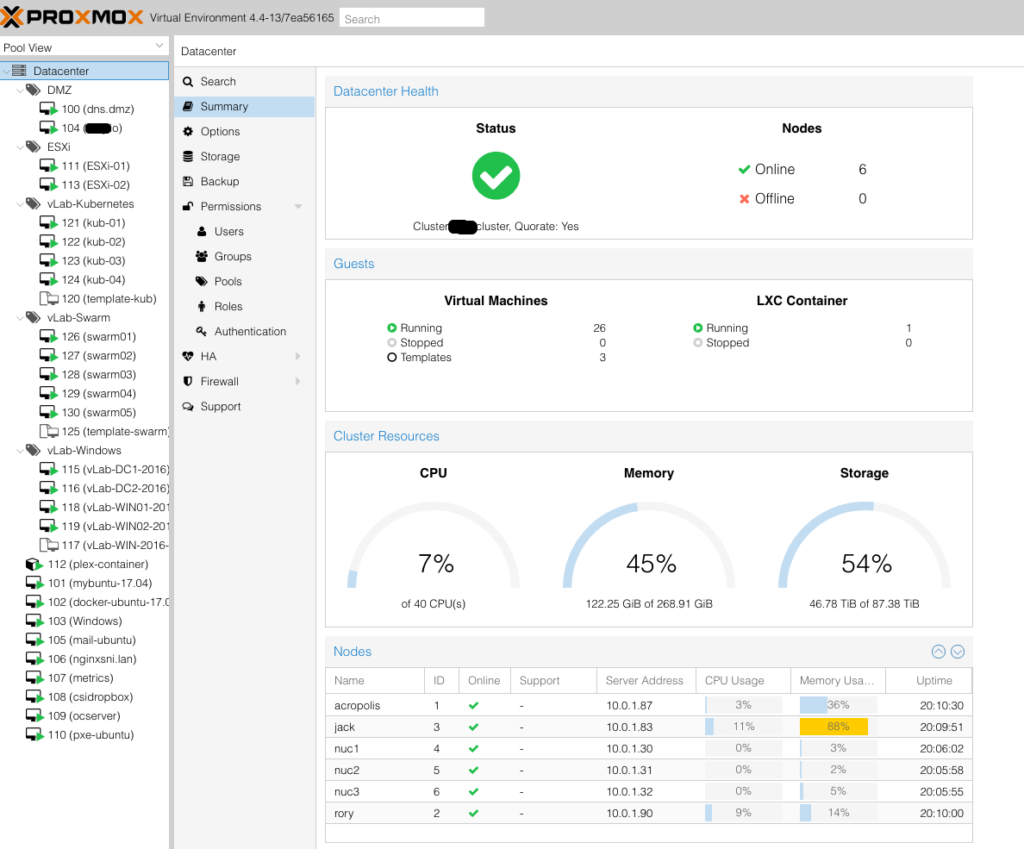 A few months ago I migrated my home lab to Proxmox. After fighting with a few things, it’s time to move back to ESXi.

It must have been about two months ago that I decided I wanted to move away from ESXi. My VMUG renewal is coming up, I wasn’t very happy with the bloated beast that vCenter has become, and I found I very much enjoyed Proxmox from my usage of it on the NucNucNuc.

Here is a screenshot of my Proxmox cluster at its height.

With the way that Proxmox clustering works, I was able to re-use an old AspireRevo R3700 (the acropolis) with a D525 Atom as a cluster witness.

For me, one of the best parts of Proxmox were Linux containers. I had a few running, but in particular, my Plex container just felt so clean. Instead of running a huge bloated OS, I just ran a simple little container.

The dark underbelly of Proxmox

Unfortunately, things weren’t perfect. The immediate issue that I noticed was that my cluster was using a solid 30% more electricity than the same servers, basic VMs, and setup under ESXi. As I learned, Proxmox doesn’t do any power management, where ESXi does. And while you can install cpufrequtils and setup governors, apparently it can very negatively impact VMs.

My Proxmox cluster ran a solid 342 watts. Right now, the exact same hardware running under ESXi is at 303 watts. 11% is not an insignificant savings, especially when a focus of my lab has been to keep the power consumption lower.

A HUGE negative for me was the console. I don’t use many Windows VMs, but the ones I do use need to work. Coming from ESXi, the NoVNC/SPICE consoles in Proxmox is at best, a hack. And finally, I didn’t want to mess with RDP.

This poor console experience also translated elsewhere. Proxmox doesn’t do well if you venture away from the official support list. I wanted to play with Solaris and OpenIndiana, and at least under Proxmox, it was not really workable. As I sometimes use “off the beaten path” software, this was difficult for me as well.

Proxmox also had another serious negative for me. I HATED the networking. I guess that’s the downside of coming from a polished system like ESXi, but in Proxmox it’s just uncomfortable. I even set up Open vSwitch networking instead of Linux bridges, and while it was better, I only liked it slightly more. Not to mention it appeared to have some issues when I started to subject it to serious load.

Any time I had to mess with any networking, touch any VLANs, etc, I just groaned. I’ve got at least 25 years of Linux experience, so it’s not difficult. It was just annoying.

There was also a bit of lag in almost all of my VMs that I was never able to attribute to anything. All the networking was set up properly, access to the “datastores” was fast and reliable, and all the VMs had sufficient resource allocation. Linux VMs ran slow and sluggish, and even with SPICE marginally working, Windows VMs were like clicking around in molasses.

The quorum system is a bit of black magic to me. In more advanced setups, best practice says you set up completely separate NICs, switches, etc to make sure that your cluster doesn’t lose quorum. Because bad things happen.

Trust me, I found out.

The reality is, especially when you are using some NUCs and an Atom D525 net-top, it’s hard to set up “proper” redundancy. I was forced to use a bunch of USB NICs to try and achieve acceptable levels of redundancy, which was tenuous at best.

I’ve got a box of these guys now:

So what happens when 3/6 of your quorum members are on the other end of a 4x1Gbps LAG and the uplink gets saturated even for a second during a VM migration? You lose quorum and bad things happen.

Let me just say. This does NOT mean it is a broken system. It just means it’s not working my MY setup. More than anything, it just felt like a bunch of extra work to keep things running at acceptable levels.

Migration between hypervisors is actually surprisingly easy, assuming you have multiple hosts where you can run the new hypervisor on one of them.

With a decent Ethernet connection between the servers, the whole cloning process of a VM really only takes a few minutes.

Even if you don’t have multiple servers, as long as you have some sort of networked or external storage, you can Clonezilla all your VMs to flat file images, install the new hypervisor, and then Clonezilla the VMs back from the disk images.

I could never really get ESXi out of my system. Even under Proxmox, I had setup a small virtualized ESXi cluster to play with things. It’s just such a polished system, and it’s what my business uses.

After the split-brained quorum situation, I quickly made the decision to migrate back to ESXi fully. With the Clonezilla solution outlined above, it took all of about two hours.

Unfortunately for the poor D525, the “acropolis”, that means it’s the end of the road. This processor does not even support the VT-x required for virtualization. Even under Proxmox, at the very best it could run a very light container or two.

I was excited to give this ancient hardware new life as a quorom witness, but with ESXi, there is no place for it.

The Acropolis stands alone, waiting for the quorom which will never return.

I haven’t had the heart to wipe it yet, so back on a shelf it went.

Proxmox and Ceph for the NucNucNuc

Abusing the QNAP TS-831x with ZFS